When he came to us in the Autumn of 2008, Bryn (formerly known as Bran) was an eight month old rough collie pup with an identity crisis! Jean, our friend in Eire, was asked by his breeder if she could find a home for a puppy which the Irish Kennel Club had refused to register owing to his being mis-marked (lacking the usual white trimmings!). In addition it looked like he was possibly a throwback from the days when roughs were bred with smooths – so we thought we would call him a Smough (rather than a Rooth) Collie!     Bran and his siblings were advertised on one of the many Irish websites which have been established to sell animals to the unsuspecting public. In the advert, his breeder saw nothing wrong in including a snap of the shed in which they lived! 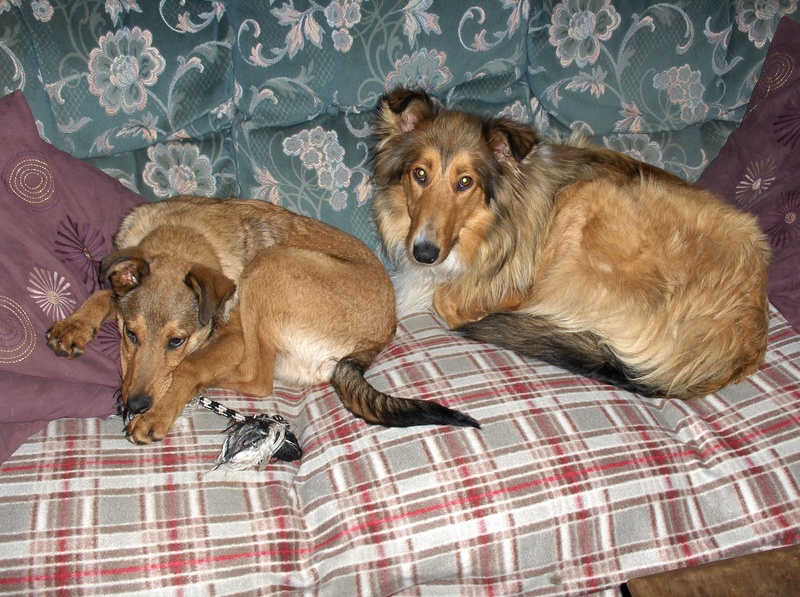 Early in 2009, Bran caught the attention of a local dog-walker in Stratford-upon-Avon who was looking for a playmate for her existing rescue dog, Zak.  The two boys hit it off straightaway and look out for each other when out on their walks.

Preferring to keep his short to medium coat, Bryn has turned out to be a real stunner.  Now that he is fully-grown, we do wonder whether there is a little bit of GSD in him which is quite ironic as Sue had always wanted a Shepherd but wondered if such a large dog would be too strong for her.  Anyway, whatever his genetic make-up, he is a real handsome guy. 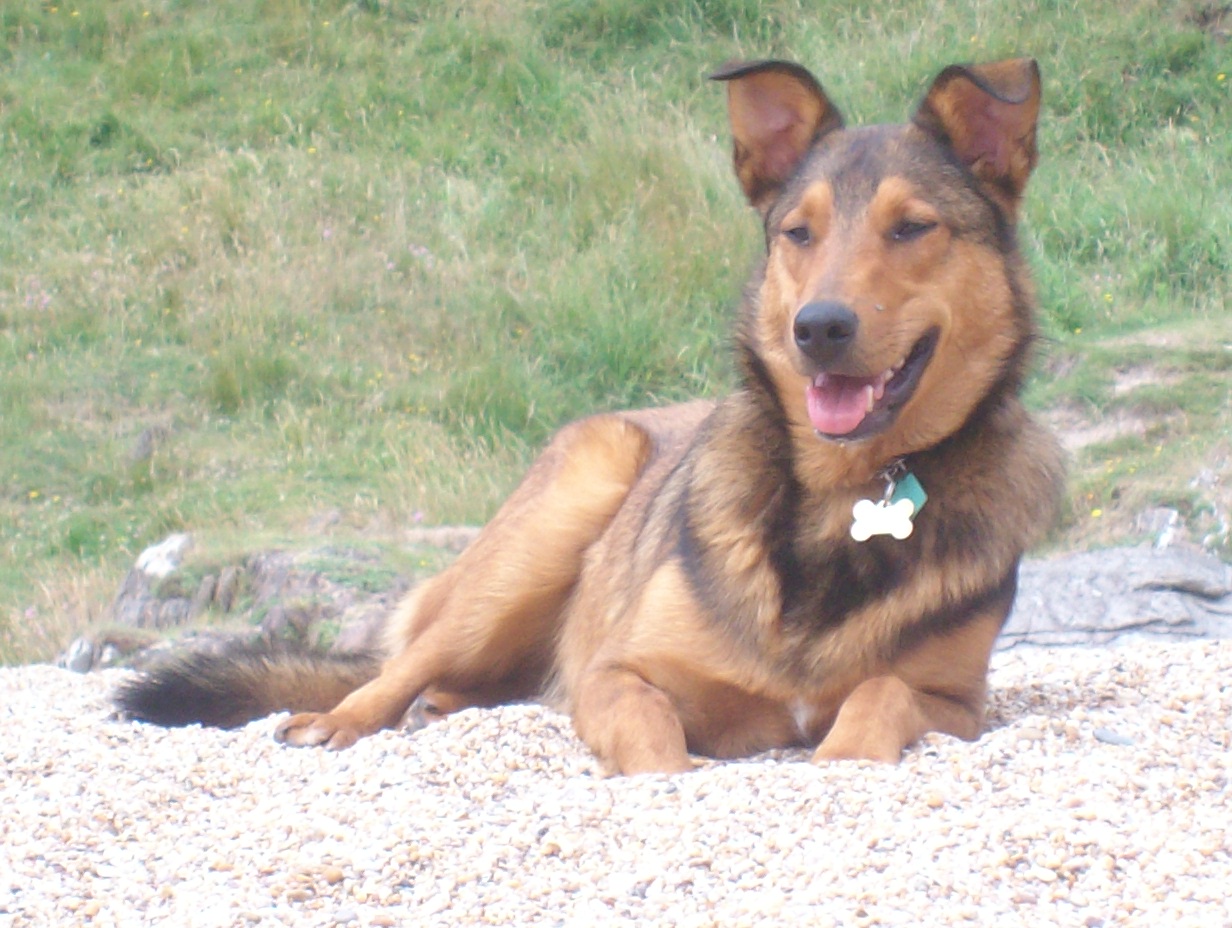 Occasionally we see Sue with Zak and Bryn down by the river or on the race-course and, on one occasion, Bryn came running over not to greet us but to make a real fuss of Bonnie (with whom he travelled over from Eire) who had come to visit us that day.

What a wonderful picture!

Bryn, Zak and Mallory (the Bernese) with Sue and Tony's grandchildren.

Bryn was destined to be well-travelled, having been on holiday this year to Devon and, with his very own pet passport, he's been across the Channel to France.

not quite as brave as Mallory! 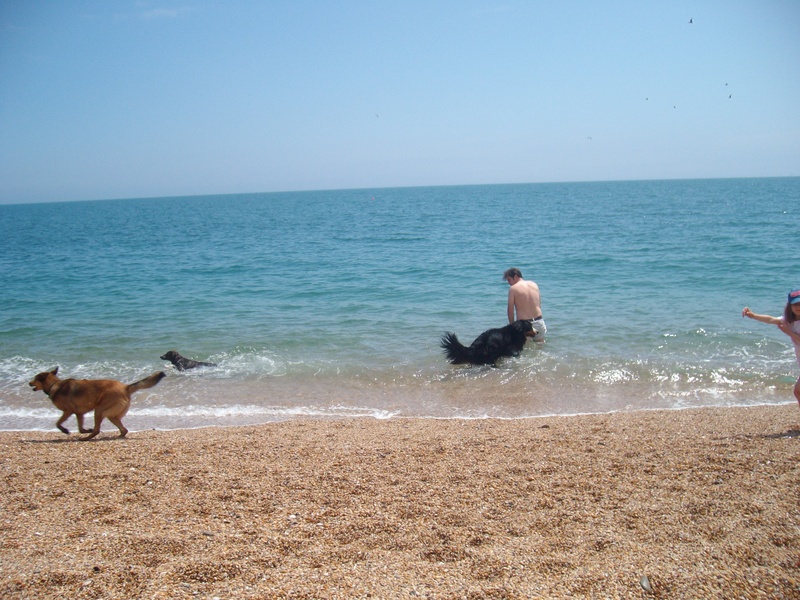 there's nothing better than to crash out with friends! 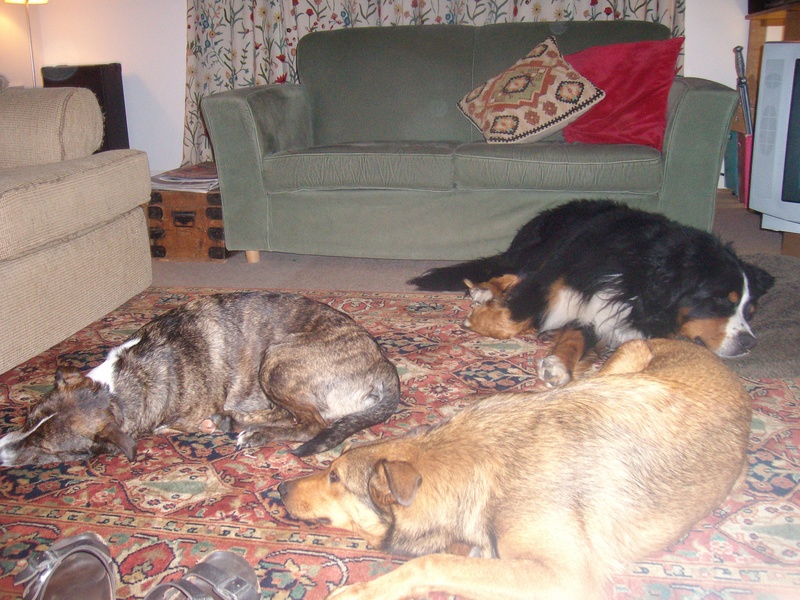 Dear Bryn - you are so lucky.  Let’s hope your siblings are as fortunate as you and that they are also with kind and loving owners.  Thank you Sue and Tony for giving Bryn the “Smough Collie” such a fantastic home - even though we didn’t know how big he would grow!  And thanks to Kate for the super pics ... keep them coming.